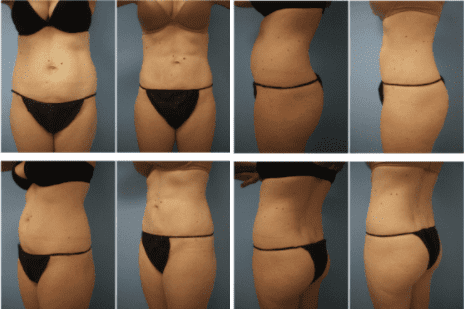 This is a 31-year-old woman who complained of having increased fullness along the abdominal region. She eats a very healthy diet, exercises regularly and maintains a very stable weight. Upon physical examination, she was found to have good muscle tone and minimal excess skin. She had well-localized excess fat along the upper and lower abdomen and flanks.

She also had slight scoliosis creating an asymmetry along the hip region. After discussing her options, Dr. Iliana Sweis and the patient elected to proceed with ultra-sound assisted liposuction (UAL) of the abdomen and flanks. These photos were taken 4 months following her surgery. This is a 43-year-old man from the north suburbs of Chicago who presented complaining of excess fat along the abdomen and flanks. He works out regularly and has maintained a stable weight for several years.

There were just a few areas that he could not modify with diet and exercise. Dr. Sweis performed UAL (ultrasound-assisted liposuction) along the upper and lower abdomen and flanks. His photos are 3 months following his procedure. This is a 50-year-old woman from Chicago who complained of having excess fat deposition along the hip and thigh region. She eats a very healthy diet and, prior to menopause, had maintained a stable weight. However, over the last couple of years, she noticed weight gain, especially in the hip, thigh, and lower abdominal regions.

After physical examination and discussion of her options, the patient and Dr. Sweis elected to proceed with liposuction of the outer hips and outer thighs with slight liposuction along the posterior thighs. The patient felt she could lose the weight along her abdomen with diet and exercise. These photos are 6 months following her surgery.

This is a 44-year-old woman from a suburb of Chicago who presented to Dr. Sweis complaining of having excess fullness along with the abdominal, hip, and thigh regions. Upon physical examination, it appeared that the areas in need of attention were the abdomen, flanks, hips, lower back, and outer thighs. She had undergone two C-Sections with a resulting indentation of the C-Section scars. Dr. Iliana Sweis proceeded with a mini-abdominoplasty to release and remove the previous C-section scars as well as liposuction of the upper abdomen, waist region, flanks, outer hips, outer thighs, and lower back.

The postoperative photos were taken 10 weeks following the mini-abdominoplasty and extensive liposuction. The scar is still red which is normal during the early healing period. In general, the color will fade over the course of healing. The time for the fading and improvement of the scar varies from patient to patient, but it can take anywhere from 6 months to 3 years. This patient also had residual bruising along the back of her thighs that took a bit longer than usual to resolve. The bruising may be seen in her photographs as longitudinal lines along the back of her thighs. The bruising was limited to the imprint left by the rectangular foam pads placed under her compression garment.